Looking for baseball fielding drills? You’ve come to the right place! In this article, I’ll cover two of my favorite drills for developing throwing and catching skills for your infielders and outfielders.

Fielding Drill #1: Around The World

This drill is performed with every infield position manned. When the drill is first run it can be done without base runners. Once the drill is practiced a few times then outfielders can be used for base runners. The ball should go “around the world” and back home before the runner makes it all the way around the bases. A game could even be run with a point being awarded to the runners or the infielders depending on who wins. 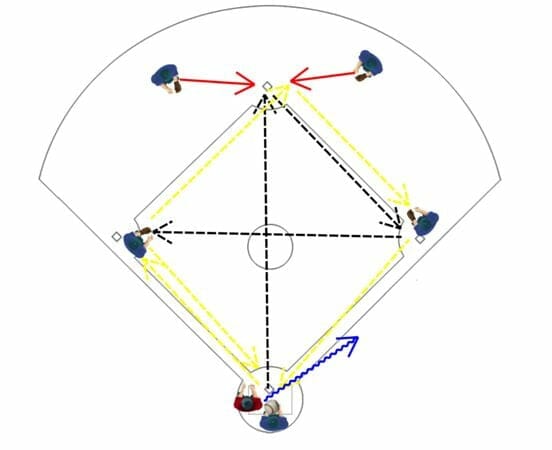 If a base runner is used, the catcher should hold onto the ball until the base runner clears past him and then begin the throwing drill by going to second base.

The coach should be looking to make sure players are catching the ball with two hands and transitioning smoothly from catching the ball to throwing the ball. Players should make sure they touch the base with each and every catch. It’s important that players keep their feet under them and make strong throws.

The coach should also pay attention to the way the base runner circles the bases. The player should run in a straight line to each base and only curve out to circle each bag about 10-15 fifteen before the bag. This is the shortest distance. (Runners should not make a huge circle around the bases.)

The main purpose of this fielding drill is to work on getting the ball from the outfield into the infield.

This drill requires a fielder at second, at third, a catcher, a cutoff man, and outfielders.

Once the ball is hit, the coach should tell the catcher where the ball should be thrown. First base is 1, second is 2, third is 3, and home is 4. As the outfielder throws the ball to the cutoff, the catcher recognizes if the cutoff man needs to catch the throw or not.

For example, if the coach wants the ball thrown to third (because that’s where the runner might be thrown out) then the catcher should yell “cut 3!”

If the cutoff doesn’t hear anything then he should just let the ball go. If the catcher does yell “cut” and then a number then the cutoff needs to catch the ball and then throw to the correct base.

Too often outfielders try to throw the ball all the way home or to a base and the ball takes too long to get there. Outfielders should always aim to hit the cutoff man. In fact, the outfield should throw right at the cutoff man’s head. The ball should be on a line.