The athletic stance is almost universal, across all sports. While there are slight adjustments, maybe putting more weight on the back or

front foot, or spreading the feet a little wider, basically whether your a boxer or a basketball player, you’ll be getting in the same athletic stance: feet shoulder width apart, knees bent, hips stacked on top, and our weight on the balls of our feet.

And it’s the same with both hitting and pitching. While the pitcher’s movement is more exaggerated than the hitter’s, at their bases they are eerily similar. That’s why as a hitting coach, it’s important to look at how the best pitchers use their bodies to create that extra oomph on their fast ball.

It all starts with the hands. The pitcher always starts with their hands up close to their chest, at somewhere around a 90 degree angle, with their elbows low and in tight – and it should be the same for batters. Like the pitcher, you’re not going to actually swing through with your hands this close to the chest, but it is a good, solid starting point. Some batter’s will bring their elbows out and up at their starting position, which is an incredibly weak position.

Take this pressure test for example. With the batter’s hands close in tight, the coach in this image struggles to move them in any direction with two hands; but with the elbow extended out, he can push the batter’s hands away from his body with just one free hand.

The next thing we want to look at is the load and stride. To load up for the pitch, the pitcher will bring his knee up off the ground into a deep bend, and then transfer their weight onto it as they stride forward and release the pitch. It’s the same for the batter. While the motion isn’t quite as big as a pitchers, it’s part of the same concept – loading weight onto the back foot and then transferring that weight back to the front foot to get extra power into the swing.

Without the load or with a completely flat stride, a great pitcher would lose a ton of MPH on their fastball, and it’s the same with a hitter’s power.

The last part of the pitch/swing is the squishing of the bug. Both the batter and pitcher will rotate their back foot along with their body, pushing down into the ground and squashing the bug underneath their foot. The pitcher will continue this motion all the way through, bringing the foot up off the ground, but as a batter, we’re just focusing on the initial movement.

That’s it for today. Hope you enjoyed the post, and if you’re looking for some ways to improve your pitching power, check out these baseball pitching drills! 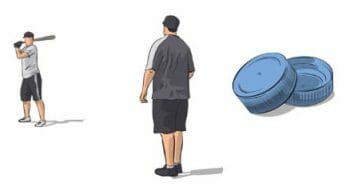 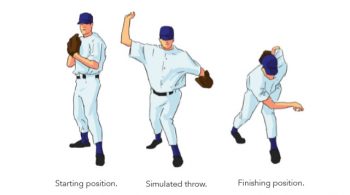 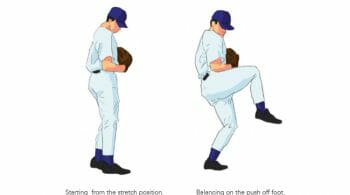